The RSG has been hard at work today and it has come up with the World Korfball Championships.

It looks like a less strict netball, more flowing and the goal is a yellow hoop without a net.

There are teams from all over the world competing and we are getting to the pointy end of the comp.

Korfball (Dutch: Korfbal) is a ball sport, with similarities to netball and basketball. It is played by two teams of eight players with either eight females in each team or with four females and four males in each team. The objective is to throw a ball through a bottomless basket that is mounted on a 3.5 m (11.5 feet) high pole.

The sport was invented by Dutch school teacher Nico Broekhuysen in 1902. In the Netherlands, there are around 580 clubs and over 100,000 people playing korfball. It has a mixed-gender league and an all-women league, but no all-men league. The sport is also very popular in Belgium and Taiwan, and is played in many other countries. Mixed-gender korfball is more generally played in the north of the Netherlands, while all-female korfball is generally played in the south.

Korfball is played inside in winter and outdoors in spring and fall.

A korfball team consists of eight players; all female, or four female and four male.[4]

Every team has their own coach, who can switch players during a match, negotiate with the referee, create the formation for the match and keep up the team’s spirit.[1] 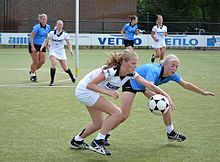 Korfbal match in the Netherlands

Four players of each team are in one zone, and the others are in the other zone. During the match they cannot switch zones. In the mixed gender league, men and women play side-by-side, but duels are man to man and woman to woman. However, it is allowed for a player to switch among opponents whom he/she is defending, as long as they are of the same sex.

At the beginning of the match one team chooses one-half of the court. That half will be their defending zone, with ‘their’ basket in it. Players score by throwing the ball through the opponents’ basket. After two goals, the teams change zones: defenders become attackers and attackers become defenders. In between those zone-changes, attackers cannot set foot on their defending zone or vice versa. At half-time teams swap halves.

The rules prevent physical strength dominating the game. Blocking, tackling and holding are not allowed, as well as kicking the ball. Once a player has the ball, one cannot dribble, run or walk with it, however, one can move one foot as long the other remains on the same spot. Therefore, tactical and efficient teamwork is required, because players need each other to keep the ball moving. A player may not attempt to score when defended, which occurs when the defender is in between the opponent and the basket, is facing his/her opponent, is within arm’s length and attempting to block the ball. This rule encourages fast movement while also limiting the impact of players’ height compared to their opponents.