The Lions would have been happy to see the end of 2015. Five losses in a row at the close of the year were finally overturned in a gripping match when they managed to take the win from the Plymouth Raiders in the first match of the 2016. 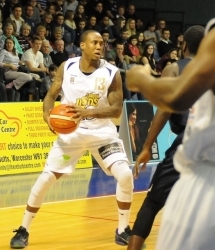 Alex Owumi joined the team mid way through December. Owumi replaced Jaron Lane who had played only limited minutes in his last few games. Head Coach, Nigel Lloyd commented, “We needed a spearhead for our team and more experience, Alex will provide that and I’m sure the fans will take to him.”

The following few clashes weren’t what Lloyd was looking for though. Losses to Sheffield, Glasgow and Worcester must have made the Christmas period a little less merry, but with last weekend’s thrilling win in the dying minutes the Lions will be looking to build on that this Friday when they take on the Leicester Riders at the Copper Box.

The match will be shown in its entirety, free and live on webcastsport.com